Skip to content
⚠ Practicalli Clojure is converting to MkDocs and a content refactor so PR's are of limited value at present. Some page links & images may be broken.

The best editor to use for learning Clojure is the editor already familiar with (or want to learn).

Use SublimeText & ClojureSublimed if unsure where to start as it will be the simplest tool to use.

An ideal Clojure editor includes the these core features

Emacs is a very powerful editor with thousands of packages enabling a person to do almost any digital task concievable. Emacs is highly extensible via the ELisp programming language used to write configuration and the numerous Emacs packages.

Use one of the popular community configurations for Emacs or visit the CIDER documentation to learn how to add Clojure support to Emacs.

Emacs 28 onward uses Native Compilation of Emacs packages, dramatically speeding up many common tasks and keeping Emacs a valuable option for development (and everything else).

Spacemacs is a community configuration bringing Emacs features and Vim sytle editing together. Spacemacs uses a mnemonic menu system that makes it easy to learn and provides detailed documentation for configuring and using Emacs.

The Practicalli configuration should replace the ~/.spacemacs file if it exists

Doom Emacs is a community configuration for Emacs that provides a minimalistic configuration that is readily customisable. Doom Emacs is most suited to those comming from a Vim-style editing background or simply looking for a lightweight setup with options to extend the configuration. 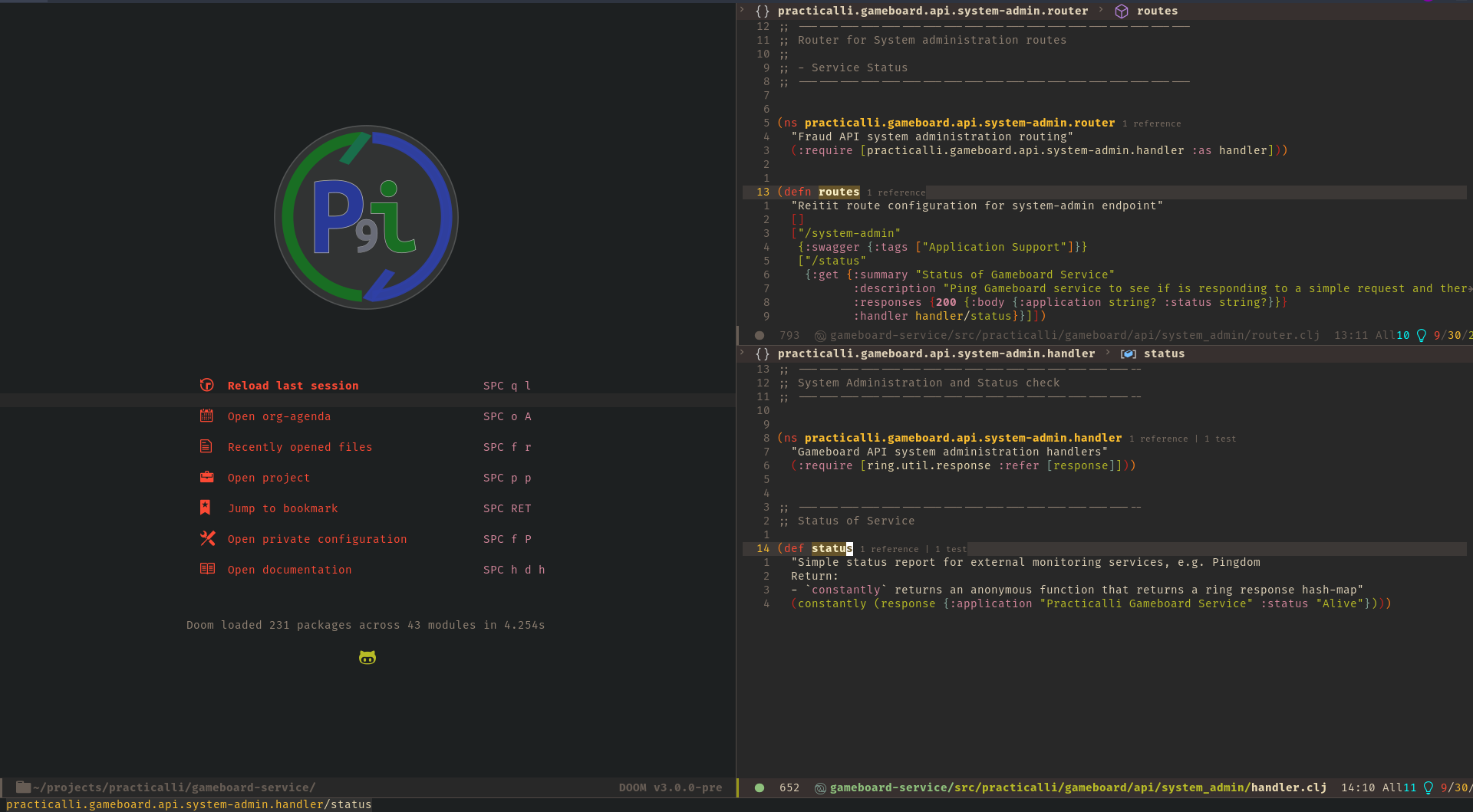 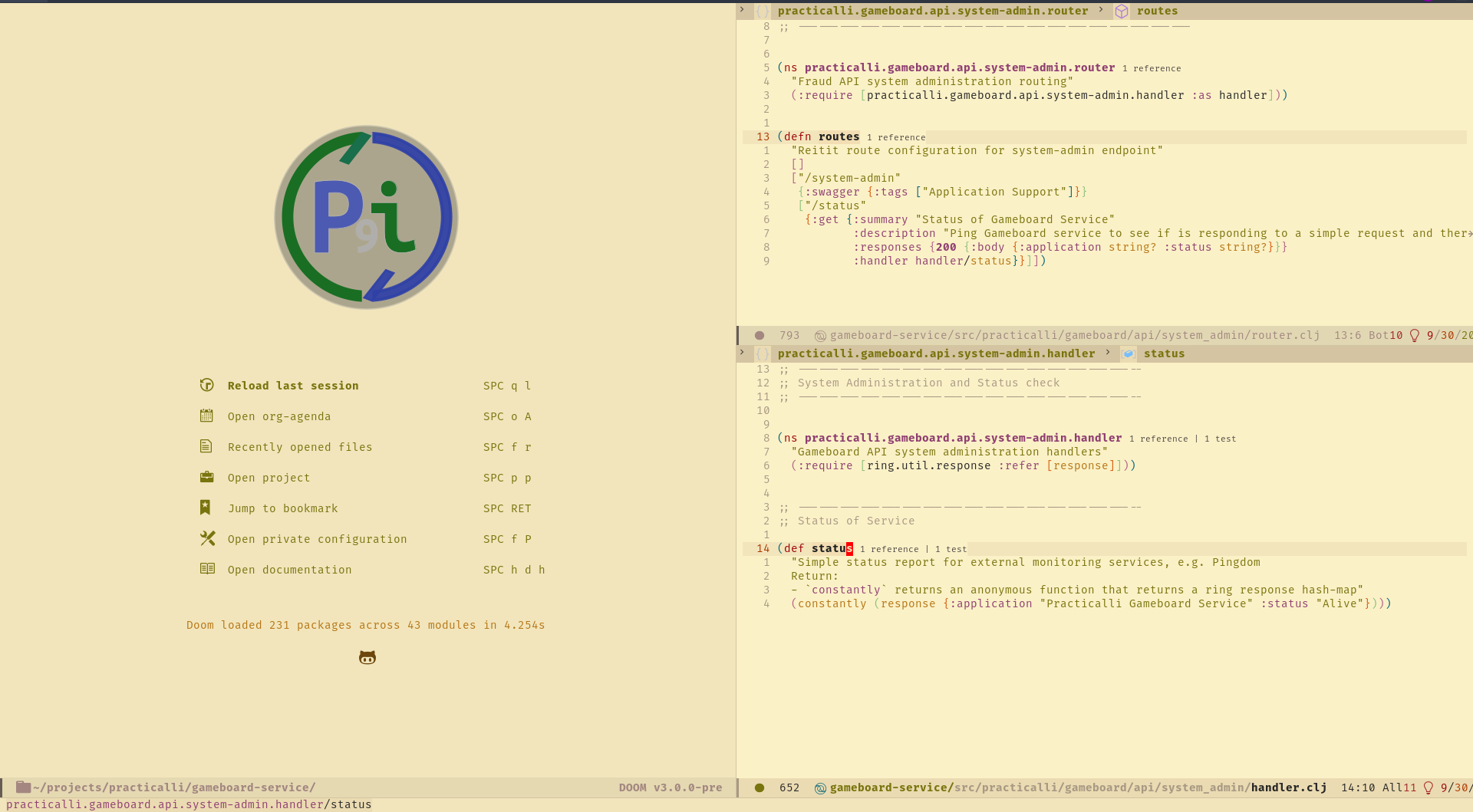 Emacs Prelude is an easy to use Emacs configuration for Emacs newcomers and lots of additional power for Emacs power users, from the author of CIDER - the definitive Clojure IDE for Emacs.

Neovim is a hyper-extensible text editor that evolved from Vim whist still fully compatible with Vim"s editing model and Vimscript extension language. Neovim uses lua configuration and with the aniseed package configuration and Neovim packages can be written in Fennel (a lisp dialect).

The Neovim community provides a large number of packages to add features.

Conjure is predominantly used for Clojure development and supports Clojure CLI, Leiningen and Babashka projects (as well as several other Lisp dialects and interesting languages)

practicalli/neovim-config-redux is written in Fennel as it is very close to Clojure.

A Which-key menu can be used to drive Neovim, with a mnemonic set of key bindings to make adoptiong Neovim easier.

Conjure provides interactive environment for evaluating Clojure code and providing inline results (or see results in an Heads Up Display or Log buffer).

Practicalli Neovim covers installation and basic use of Neovim for Clojure development.

Try the Conjure interactive :ConjureSchool tutorial without the need to install, only a recent version of neovim

:q to quit the tutorial.

Add the Clojure layer to the SpaceVim custom configuration file

VS Code is a freely available editor build on open source and available for Linux, MacOS and Microsoft Windows.

VS Code has a large marketplace of extensions, proiding additional tools for a complete development environment.

Calva is the most commonly used extension for Clojure support and aims to provide similar features to Emacs Cider (and uses some of the same Clojure libraries).

VSpaceCode provides a mnemonic menu (which-key) to drive VS Code by keyboard alone, vim editing and rich Git client (edamagit). VSpaceCode extension also provides key bindings for common Calva commands. Users experienced with Neovim and Emacs (Spacemacs / Doom) will find this extension makes VS Code easiter to use than vanilla VS Code or VS Code with an Neovim backend.

Calva is under active development and the #calva channel on the Clojurians Slack community can be supportive.

VSpaceCode is a Spacemacs-like community configuration for Microsoft VS Code. Drive VS Code and Calva entirely from the keyboard, using easy to remember mnemonic keys for all commands and full vim-stile editing tools.

Edamagit is a sophisticated text based Git client (like magit for Emacs) is also included in the VSpacemacs extension.

Clover is a Socket REPL based development tool for Clojure with some ClojureScript support (not including Figwheel).

SublimeText 4 is a lightweight and feature rich text editor, especially of interest that like a simple and uncluttered UI. SublimeText is a commercial project although has free trial version available (check conditions of use).

Clojure-Sublimed provides Clojure support for SublimeText 4, with support for Clojure & Edn syntax, code formatting and an nREPL client to connect to a Clojure REPL process.

Atom will be archived on December 15 2022 and no further updates from GitHub team, although it may continue in open source.

Consider using VSCode with Clover or Calva plugins instead

Proton offers a simple mnemonic menu as an alternative to the multiple keys for shortcuts in Atom.io. Proton also gives you a simple text configuration to manage all your packages quickly. Unfortunately Proton is not complete replacement of all actions.

Cursive may be an appropriate choice for people from a Java background who are already familiar with IntelliJ. Cursive will run static analysis of Clojure code when opening a Clojure project, as IntelliJ does with other languages.